What’s the secret to a great game?…Well first and foremost it has to be enjoyable. Not many games survive if they aren’t any fun!! Less obvious is that they should also be a challenge. Noughts and crosses is good fun only until you know the system and then every game becomes a boring draw.

So if you have a game that’s fun and a challenge – then it’s (in my book at least) reached the the league of Good Games. But how does it go on to become a great game? As a games designer I have a vested interest in this and I think there is a special ingredient that helps a good game to become great – and that’s when it teaches you something that you can take away from the game, after you have stopped playing.

For example, chess teaches you about cause and effect; about thinking ahead, and about strategy. Chess has proven to be fantastic for improving the academic performances of children because it equips them with a different way to think.

Football (soccer) is great because it helps you to keep fit as well as to develop social skills, organisational skills and team skills. It teaches you that it’s not just about how you do as an individual – but how well you can collectively perform as a team.

Even monopoly – as aged as it is – teaches us timeless truths about money. How the secret to money and wealth is to accumulate assets. Those who hoard their money but don’t invest in houses and hotels end up losing. (Many people could learn this lesson!) 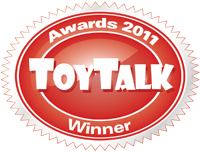 BOARD OF THE YEAR

What “take away” have I tried to include in KLOO? Well, I have tried to make it fun – and indeed we won Best Board Game of the year for our efforts. But I have also tried to create a game that helps you learn a second a language as you play. The benefits of learning a language are colossal and go well beyond getting a grade at school.

If you want to be able to make sentences in French, Spanish or Italian in seconds (even if you are an absolute beginner) and also pick up words effortlessly as you play…then KLOO is exactly right for you. Look at the two videos below and you’ll how we have turned learning a language into a game.

Imagine playing a game and being to learn a language, No study, no work, just play. Wouldn’t that be great?