When you combine the power of Discovery Learning with placing words in context and then wrap the whole experience inside a game, amazing things happen.

A Spanish Teacher completing a Case Study for the impact of KLOO in her classroom wrote this:

“After playing two or three times with the same deck students have almost magically learned all the vocabulary, not only to write and read each word correctly but also to pronounce it right.” – Veronica Fernandez Sobejano, Spanish, Teacher, Independent Case Study

KLOO IS THE ONLY SYSTEM THAT INCORPORATES CONTEXTUAL LEARNING COMBINED WITH DISCOVERY LEARNING. 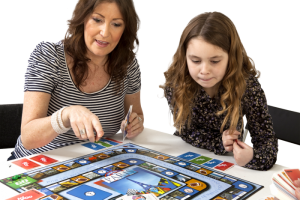 Using KLOO, players will learn how to make sentences in foreign sentences in seconds and discover the meanings of words as they play. The results often astonish those who play. In a game, players will typically learn 15 – 30 words – without working or studying. And often it’s not until they play again that they realise they have effortlessly picked up vocabulary and know how to immediately make sentences with them.

Players build vocabulary without ever feeling they are studying or working. It comes naturally. Many teachers will tell you how challenging it is to motivate some students to learn 20 words – even by next next month through usual vocabulary building techniques! 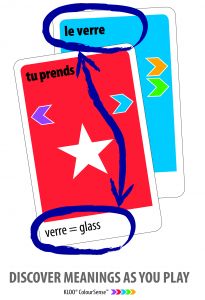 This performance gap is reinforced by Milton and Meara’s Research which shows the average accumulation of vocabulary by British children from 5 years to their GCSE exams (typically at 15 / 16 years old). It shows that by the time of the exam vocabulary is on average 850 words. It is a mainly uniform progression of 170 words a year or 15 words a month. On the basis that a typical child has 60 hours of lessons a year, children are learning at the rate of 3 words an hour. It is quite normal for children (and adults) to learn 15 – 25 words in a half hour game of KLOO.

The Learning begins as soon as you start

Within minutes of starting, players are whizzing around the game board, able to make thousands of possible sentences, speaking out loud, learning words and having fun! For many language learners KLOO is not just a game – it’s a game changer. To see how easy (super easy) it is to make sentences watch this video here.

How to make your own KLOO cards for FREE

You can buy ranges of KLOO cards at www.mflgames.com. You can also make your own KLOO
cards absolutely FREE and benefit from the Contextual and Discovery Learning. Go here the get started: www.kloogame.com/make-your-own

Watch this short video to see how players of KLOO learn 30 words an hour, 1000% faster. In just six hours, players can learn what the average teenage student learns in a year.

The overlooked fact. Using the right language tools make the difference between learning and not

KLOO is the only language learning system that combines the two most powerful language acquisition principles inside a single game.